“Chester Englander is a master of all percussion instruments, but his really special and unique gift to the world is his cimbalom playing. He has brought a new level of facility and virtuosity to the instrument, a new level of tonal color and command that brings cimbalom playing to a whole new level. Having worked with him many, many times with John Adams’ work Scheherazade.2, I can’t imagine a more conscientious colleague who truly loves making music and is also a joy to be around.” – Leila Josefowicz 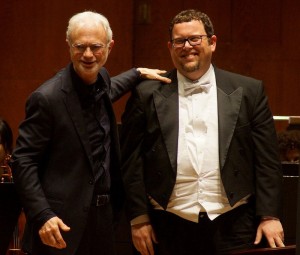 Chester with John Adams enjoying the applause after the World Premiere of Scheherazade.2.

The cimbalom (sim-bah-lohm) is a Hungarian concert dulcimer that can trace its origins to the ancient Babylonian santur.  The instrument has taken on many forms during its nomadic path from Mesopotamia across the Silk Road to as far away as China.  Examples of these are the santoor (India), the tsymbaly (Russia, Ukraine),the yang qin (China), and the hackbrett (Germany, Austria). 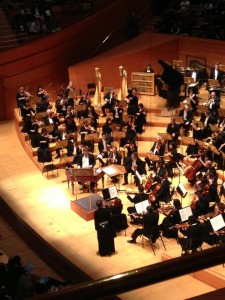 Chester warming up on stage with the LA Phil before a performance of Háry János Suite.

The cimbalom was introduced in Hungary by their Jewish population. It was embraced by the Roma (Gypsy) people, who incorporated it into their original music throughout Eastern Europe.  József Schunda introduced the first pedal-dampened concert-range cimbalom with legs in 1874 and engineered the first chromatic system of strings. Schunda taught many others the art of building cimbaloms, including his prize student Lajos Bohák.  Bohák made changes in the soundboard design that allowed for greater resonance and stability of tuning.  Chester performs on two outstanding, modern cimbaloms built by Balázs Kovács, the latest master builder to emerge from Bohák’s workshop.

“While the orchestral playing is as ravishing as listeners have come to expect from Morlot and Seattle, the soloists brought in from outside the band are among the very hottest players on their respective instruments… The cimbalom playing of percussionist Chester Englander lends an unexpected delight to Mystère de l’instant.” – CD review by WQXR-FM (NYC) 8/8/2016

The 2018-19 season was very exciting, including performances of Scheherazade.2 with The Cleveland Orchestra in November 2018 and the Baltimore Symphony in March 2019. In February, Chester performed a series of recitals with violinist Vijay Gupta (http://www.guptaviolin.com), a 2018 MacArthur Fellow and the Founder/Artistic Director of Street Symphony (http://www.StreetSymphony.org), an organization wholly devoted to “powerful engagements between professional and emerging artists and communities disenfranchised by homelessness and incarceration in Los Angeles County”. Through Street Symphony, Chester and Vijay performed at the Men’s Central Jail and the Midnight Mission in Skid Row, as well as a full recital at the Skid Row Museum and Archive.

The 2019-20 season was very exciting, starting with a performance and recording of Saint Elizabeth’s Bells by Kati Agócs with cellist Nick Diodore of the new music ensemble No Exit (http://www.noexitnewmusic.com). This was followed by performances of Scheherazade.2 with violinist Leila Josefowicz and the Rochester Philharmonic and the Philadelphia Orchestra. In January Chester performed Scheherazade.2 with the Oregon Symphony,  followed by performances of Bartók’s Rhapsody #1 for Violin and Orchestra with violinist Jun Iwasaki and the Nashville Symphony.

Since the onset of COVID-19, Chester has remained active both in performance and planning for the future. In March 2020, Chester and his wife, violinist Rachel Englander, performed a program to raise money for their fellow local musicians in Cleveland, OH. The program included music of Bach, Szálkák for solo cimbalom by György Kurtág, and Ravel’s Tzigane. In June 2020, Chester performed the World Premiere of Michelangelo Fragments by Joseph Pereira (http://www.jpereiramusic.com), commissioned by American Composers Orchestra (http://www.americancomposers.org). He also performed Ragtime by Igor Stravinsky with the Louisville Orchestra in October 2020.

During Chester’s week with the River Oaks Chamber Orchestra in September 2016, he was asked to film a short video featuring the cimbalom:

Mystère de l’instant with the Seattle Symphony, featuring Chester as the cimbalom soloist:

If you have any questions feel free to contact me.